Discover 49 unique engineering baby names in this extensive list! Plus a short history of the engineer themselves and the meaning of the name.

As an Amazon Associate, I may earn a small commission from qualifying purchases at no additional cost to you.

Alan. Alan Turing was a mathematician and computer scientist known for his work with encryption and the Turing Test. This name’s meaning is uncertain, but could mean handsome.

Albert. Albert Einstein was a physicist known for his work on the theory of relativity. Meaning: noble and bright

Alexandre. Alexandre Eiffel, also known as “the magician of iron” was a French engineer who designed the Eiffel tower, and constructed several bridges for the railway network in France. This name means “to defend.”

Amar. Amar Bose is an American engineer who specialized in psychoacoustics and speaker technology, and founded the Bose Corporation, known for its high quality acoustics and sound systems. The name Amar means immortal or long-lived.

Aurel. Aurel Stodola was a Slovak engineer who studied thermodynamics and invented the first heat pump, and is known as the father of steam turbines. This name means “golden” or “gilded.”

Charles. Charles Babbage was a scientist and mathematician known as the father of computers. Meaning: “man”

Clarence. Clarence Birdseye was the founder of the technique for freezing food. This British name comes from the name of the town Clare.

Daimler. Gottlieb Daimler was a German industrial engineer famous for his work on the internal combustion engine. Meaning: unknown. 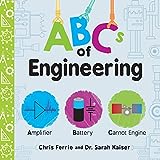 Train your little one to be an engineer with this engineering book for babies! A is for Amplifier. B is for Battery. C is for Carnot Engine! Click the image to see more details on Amazon

Erasmus. Erasmus was Charles Darwin’s grandfather who founded the Lunar Society, a group of philosophers and industrialists, and wrote poems about evolution and history. Meaning: beloved

Jacob. Jacob Bernoulli was a Swiss mathematician known for his work on the Bernoulli Differential Equation and Bernoulli Numbers. The name Jacob means “supplanter” in Greek

Johann. Johann Gutenberg invented the printing press. This name is a form of John, which means “Yaweh is gracious”

Joseph. Sir Joseph William Bazalgette was a British civil engineer who designed the London sewer system. This name means “he will add” in Hebrew

Karl. Karl Benz was a German automobile engineer, who founded several factories, including an iron foundry, a factory for sheet metal working, and the cars that are now known as Mercedes-Benz. This name is a variation of Charles, meaning “man”

Linus. Linus Torvalds is a Finnish-American software engineer known as the inventor of the Linux operating system. Meaning: flax 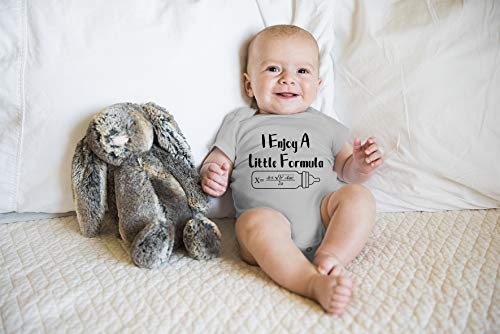 Show off your baby’s nerd status with this adorable onesie! Click the image to see more details on Amazon

Neil. Aeronautical engineer. Neil Armstrong was the first person to walk on the moon. This name may mean champion or cloud.

Nikola. Nikola Tesla was a scientist who is famous for his inventions and research on AC electricity, the Tesla coil, and the AC induction motor. Meaning: victory of the people.

Beatrice. American engineer Beatrice Hicks was the first woman hired as an engineer by Western Electric, where she worked on technology for telephone and aircraft communication. Beatrice means “voyager” or “traveler”

Cleone. British automotive engineer Cleone Benest was the first woman to pass the examinations for the Royal Automobile Club. She also established an engineering form staffed by women. In addition, she fenced and competed in motorsports! Cleone comes from the name of the Greek town Cleonae.

Elmina. American structural engineer Elmina Wilson designed skyscrapers, such as the Flatiron Building in Manhattan. This name means “will helmet.”

Emily. Emily Roebling was a civil engineer who played a large role in construction of the Brooklyn Bridge. Meaning:  universal

Gertrude. M. Gertrude Rand was an American engineer and psychologist who developed the lighting design for the Holland Tunnel and vision standards for airplane pilots during World War II. This name means spear of strength. 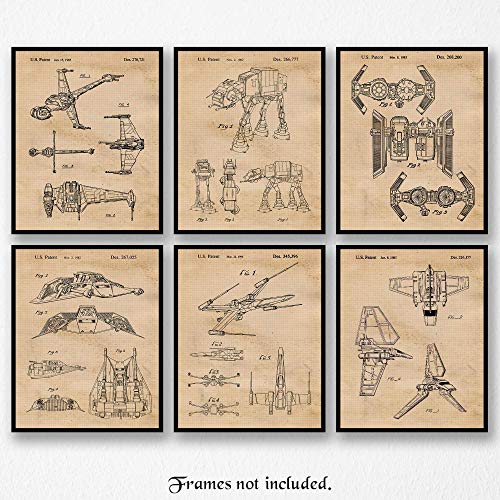 A nerdy nursery wouldn’t be complete without some nerdy artwork, like schematics of famous Star Wars vehicles! Click the image to see more details on Amazon

Irene. Irene Fischer was an Austrian engineer who pioneered the field of geodesy, applying math and science to the developing space and satellite program in the 1950s. Meaning: peace

Kay. Computer programmer Kathleen ” Kay” Antonelli programmed the ENIAC, the first digital computer. She worked with programmers Betty Holberton, Ruth Teitelbaum, Frances Spence, Marlyn Meltzer, and Jean Bartik. And Kate Gleason was the first female member of the American Society of Mechanical Engineers and played a pivotal role in expanding Gleason Works, her family’s machine tool company. Kay, Kate, and Kathleen are forms of the name Katherine, which could refer to the Greek goddess Hecate, or it may mean pure.

Lillian. Lillian Gilbreth was an American industrial engineer credited with being the first industrial psychologist and the mother of modern management for her contributions to motion study and human factors in scientific management. This name could come from Lily, referring to the flower, or Elizabeth, meaning my God is an oath.

Mae. Mae Jemison was the first African American woman to reach space onboard the Endeavour space shuttle. This name comes from the Roman goddess Maia.

Martha. Martha Coston was an engineer who developed signalling flares and pyrotechnics in the late 1800s. This Aramaic name means the lady

Mary. Mary Anderson was credited as the inventor of the windshield wiper. Meaning: beloved

Mathilde. Danish telegraph operator Mathilde Fibiger was one of the first women to hold a job as a technologist during the Industrial Revolution. Mathilde means strength in battle.

I love this little Einstein plush toy! Click the image to see more details on Amazon

Nora. Nora Blatch was a American civil engineer who worked for the American Bridge Company and the New York City Board of Water Supply. The meaning of this name is unknown.

Olive. Olive Dennis was the Baltimore and Ohio Railroad’s first service engineer, responsible for engineering improvements to passenger service and comfort. This name comes from the olive tree.

Radia. Radia Perlman is an American computer programmer and network engineer who invented STP and wireless network bridges, and is known for her work in network security. Meaning: unknown.

Sarah. English engineer Sarah Guppy was the first woman to patent a bridge. In addition, she designed a teapot that also cooked eggs, and a candlestick that would burn longer. This name means lady or princess.

Thelma. Computer engineer Thelma Estrin was one of the first people to apply computer technology to medical research, meaning she was one of the pioneers of biomedical engineering. The meaning of this name is unknown.

What are some names that mean engineer?

Some names that mean engineer are: Daedalus, Ferrer, Jenner, Machanidis, and Wright.

Daedalus. You may know of the famous inventor from Greek mythology, but did you know it actually means to work cunningly? I can’t think of a better phrase to describe an engineer!

Ferrer. This name is perfect for a mechanical engineer or someone who works with metal. It means blacksmith.

Jenner. Like many popular names, the name Jenner used to be a surname and is now often used as a first name. Did you know that historically, it was an occupational name for someone who was an engineer? This name works for both boys and girls. Other names that sound similar: Gennaro, Gennarino (Italian), Jenaro (Spanish)

Machanidas. This name comes from the Greek word meaning machine or device.

What about names that start with “Eng”?

Engel. Engel is a German name that means angel.

Engelbert. This name means bright angel. It definitely sounds like the name of an engineer to me!

Engilram and Enguerrand are German and French names, respectively, referring to the German tribe of Angles and the word for raven.

And the names Engelicka, Engelina, Engelrada, and Engelsina remind me of names like Angelica and Angelina. They are all also likely based on the German word angel.

Are you considering engineering baby names for your little one? Have ideas I should add to this list? Let me know in the comments and I’ll add them in!