If you are looking for unique names, look no further than this list of Lord of the Rings baby names! JRR Tolkien invented several beautiful languages that are used in Middle Earth. Luckily for you, this means the names range from normal-sounding to fantastical, and everything in between!

These Lord of the Rings baby names also are a great resources for writing, naming characters, gaming, and so on!


As an Amazon Associate, I may earn a small commission from qualifying purchases at no additional cost to you. Thank you for your support.

The Top 10 Lord of the Rings Baby Names

Lord of the Rings Boy Names

Tal-Aldarion is a king of Numenor in the works of J.R.R. Tolkien. And Aldarion means “son of the trees”

Amrod is a First Age elf who traveled to Middle Earth. Meaning: “upwards-exalted” in Quenya

Anarion is the younger son of Elendil in Middle Earth. This name means “sun” in Quenya.

The warden Aragorn, Ranger of the North, is heir of Isildur and King of Gondor. This Sindarin name means noble warrior, Lord of the Tree, or kingly valour.

God and Master Smith Aule created the world of Middle Earth, along with dwarves. His name means invention. And he is also known as Oli and Mahal, which mean dream and maker, respectively.

Bruno Bracegirdle, Hobbit of the Shire, has a younger sister named Lobelia Sackville-Baggins, who is Bilbo Baggin’s adversary. The name Bruno means “armor” or “protection”

Cirdan is an elven mariner from Middle Earth.  This name means ship maker in Sindarin.

My baby has 3 of these ring toys! Click the image to see more details on Amazon

High King Dior Eluchil is a half elf in The Silmarillion from Middle Earth. Meaning: successor. He was also known as Aranel, which means king of elves

Eladrion is Aragorn’s son in J.R.R. Tolkien’s Middle Earth. Meaning: son of the Elves in Quenya

Elendil is High King of Arnor and Gondor in Middle Earth.   Meaning: student of stars or elf friend in Quenya

Eomer is a warrior of Rohan in Middle Earth.  Meaning: Eomer comes from the Anglo Saxon words for grand war horse.

Haldir, an Elf of Lothlorien and marchwarden, guides the Fellowship of the Ring. His name means hidden man.

Haldan is the Chieftain of the Haladin in the works of J.R.R. Tolkien. This name means “hidden hero”

Haleth is a boy in the Battle at Helm’s Deep. Meaning: hero in Old English

Eru Iluvitar, the supreme deity of Middle Earth, is responsible for the creation of life. And Eru means The One, and Illuvitar means Father of All.

The King of Gondor, Isildur, cut the One Ring off of Sauron’s hand. The name means devoted to the moon.

God of Dreams and Visions Lorien is associated with hope, inspiration, love, desire, dreams, sleep, and visions. In addition, he is also known as Irmo and Lurin. His name means master of desires.

Meriadoc “Merry” Brandybuck is a hobbit in Lord of the Rings. This name means joyful or cheerful. Merry makes a great nickname, don’t you think? In the hobbits’ language, his name is Kalimac.

Is Gandalf a little too much for your baby? Old Greybeard’s elven name means dreamer.

This map would make an amazing nursery decoration as a blanket or tapestry on the wall! Click the image to see more pictures and details on Amazon

The mighty lord and god of the hunt Orome was also called Lord of the Forest. He had many names, including Orome, Araw, and Aromez (meaning horn-blower), Tauron (meaning forester), and Bema (meaning lord of the forests)

Although he isn’t as well- known as Gandalf, Saruman, and Radagast, Pallando the Blue is one of the five wizards of Middle Earth. His name means far.

“Pippin” Peregrine Took is a hobbit in Lord of the Rings. Peregrin means traveler. In the tongue of the hobbits, his name is Razanur Tuk.

Samwise Gamgee is the loyal companion of Frodo Baggins in Lord of the Rings, and many readers believe he is the true hero of the story. Meaning: Simple

After the silver lamp Illuin was destroyed, the Great Tree Telperion shed silver light over the world at night in its place. Later, its flower became the moon, and one of its fruits became the White Tree of Gondor. The tree was also known as Silpion (meaning: silver light), Ninquelote (meaning white blossom), Bansil (meaning beautiful moon), and Belthil (meaning divine radiance).

I love this sticker, it would look awesome on any wall in your home! Click the image to see more pictures and details on Amazon

As guardian of the moon, Tilion took the last flower of the Great Tree Telperion and carried it to the heavens. Tilion means the horned one.


Lord of the Rings Girl Names

Adanel tells the story of Man’s original sin to Andreth. The meaning of her name is unknown.

The elf Amarie remained at home when her beloved went to Middle Earth in the Silmarillion. But her name’s meaning is unknown.

Andreth “the wise-hearted” is Boromir’s daughter. Her name means patience.

The beautiful maiden Arien guides the vessel of the sun. Her name means maiden of sunlight. Tolkien named her Urien in early drafts.

Half-elf Arwen is the daughter of Elrond in Lord of the Rings. And her name means noble.

The name of Boromir’s eldest daughter, Beril, comes from the pale green precious stone. Interesting names run in their family: she has a niece named Beldis.

Eowyn is a shield maiden in Lord of the Rings, who slays the Lord of the Nazghul. Her name means horse love.

Este is the goddess of healing. Her fountains and gardens refreshed and eased all who visited. Meaning: rest

Young Rohirrim Freda alerts Theoden that Rohan is under attack in Lord of The Rings. Freda means blessed peace.

Galadriel is queen of the elves in  Middle Earth. Her name means maiden crowned with a radiant garland. She is also known as Alatariel. 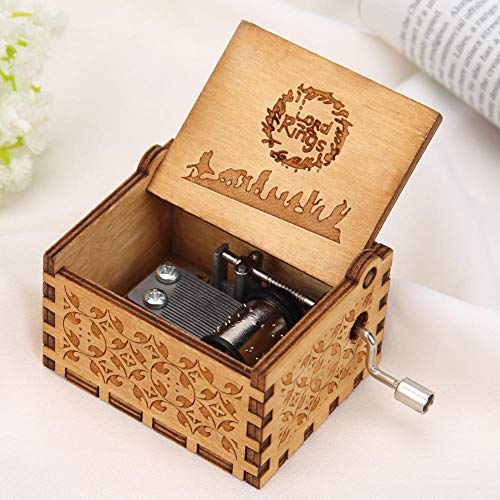 This adorable hand-crank music box plays the Lord of the Rings theme song! It makes a sweet lullaby! Click the image to see more pictures and details on Amazon

Gildis was the wife of Hador in Tolkein’s book The War of the Jewels.

Haleth is a female warrior in the First Age in the Silmarillon.

Idril is an elven princess in J.R.R. Tolkien’s Silmarillion. Her name means dear, beloved, or sweet.

The Gold Tree of Valinor, known as Laurelin, brought light to the world. Later, its fruit became the sun. And the great tree had many other beautiful names, including Malinalda (meaning tree of gold) and Culurien (meaning golden red). Laurelin means land of the valley of singing gold.

Luthien is the first elf to marry a human in the works of J.R.R. Tolkien. This beautiful name means enchantress.

Queen of Doriath and mother of Luthien, Melian was a wise woman who loved the deep shadows of the great trees. JRR Tolkien first used the names Gwenniel and Gwenethlin, but later settled on the name Melian, which means dear gift.

Queen Miriel of Noldor, also known as Sinde, was skilled at weaving and needlework. And her names mean jewel-daughter and broideress, respectively.

This name appears twice in Tolkein’s works. Morwen is the wife of Hurin and mother of Turin and Nienor. And Morwen Steelsheen is a Gondorian woman who becomes Theoden’s mother. This Welsh name means maiden.

Click the image to see more details on Amazon

Nessa the Swift was a dancer and cared for the flowers and trees, keeping them green and in bloom. Her name means young. Tolkien considered naming her Helinyetille, meaning violet, or Melesta, meaning to love.

Lady of Mercy, Nienna the Compassionate, is the goddess of mourning. Yet she teaches pity, hope, and the endurance of spirit. In Quenya, her name means she who weeps.

Hurin and Morwen’s child Nienor suffers from amnesia at the hands of the worm Glaurung. Her name means mourning.

Vaire the Weaver wove the story of Middle Earth. She is also known as Gwir. Her name means weaver.

What beautiful Lord of the Rings-themed artwork! Click the image to see more details on Amazon

What elvish language is used in Lord of the Rings?

J. R. R. Tolkien invented the language Quenya, or High Elven, which he used in The Hobbit and The Lord of the Rings. Some elves speak Sindarin, which you might call Common Elvish.

What other languages are used in Middle Earth?

How many people are named after characters from Lord of the Rings?

Many people are named after characters from Lord of the Rings!
-Between 2003-2007, about 100 children per year were named Arwen
-Rian is a traditional Irish name, about 200 children per year receive this name
-In the 1940-1960s, Merry was common name! Each year, about 200-300 children were named Merry during this time!
And if you start to consider names like Sam (Samwise) or Bill (Bilbo), you’ll find names from Middle Earth are quite common!

What is the name of the female elf in Lord of the Rings?

The name of the female elf in Lothlorien is named Galadriel. After the Fellowship of the Ring escapes the Mines of Moria, she allows Frodo and Sam to look into the Mirror of Galadriel to see possible events of the future. She is Arwen’s grandmother. Her name means lady of light.

Would you use any of these names for a baby? If you have, what sort of reactions did you get? Did many people understand the reference? I’d love to hear your experiences in the comments!

Looking for more awesome names? Check out my other lists in these posts:

1 thought on “81 Unique Lord of the Rings Baby Names”